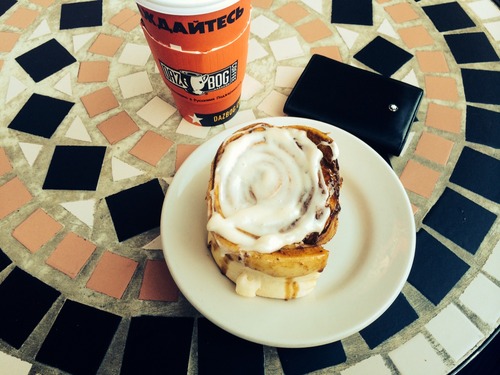 I probably look for lessons in too many places. I think that began with my parents trying to teach me a lesson no matter the situation.

My Dad for instance, even though he’s an engineer, had a knack for understanding why certain businesses did well and others did not. He used to tell me about the subtlety of Ray Kroc focusing on little things, like making sure McDonald’s always had clean restrooms.

The theory was that if people knew that McDonald’s always had clean, well lit, and stocked bathrooms, and the general public could use them whether they were going to buy something or not, then they would choose to stop there instead of another business. Once inside the fast-food chain, the smell of fresh french fries would easily overtake and you would think, “I didn’t think I was hungry, but a milkshake does sound nice…”

This one tactic kept my family stopping at McDonald’s when on cross-country trips since I can remember. For the most part this value carried forward even beyond Kroc’s heart beat. However, occasionally my Dad would walk out of a McDonald’s sputtering:

“Ray Kroc would be rolling over in his grave right now…”

Without saying anything else, I knew exactly what happened. The restroom must have been dirty.


One thing that Ray Kroc discovered, part of his contribution to the entrepreneurial ecosystem is not just the concept of a franchise, but a deep understanding of customer experience.

He understood that people thrive to obtain consistency in their lives no matter the location. Most humans would prefer a known quantity (even if it’s not the best quantity) than an unknown. Sure, sometimes it’s nice to go out to a new place, but when you are tired from driving for ten hours and have two kids in the back pummeling each other: known is far better than unknown.

Ray Kroc knew that every detail of a McDonald’s needed to be the same whether in Dallas, Texas or Garrison, Minnesota. The food is the obvious thing to think about. But when he thought of consistency, he thought of everything: lighting, tables, chairs, uniforms, and yes: restrooms.

Starbucks has the same obsession for a consistent customer experience. No matter where I am in the world, I can count on the quality, decor, and atmosphere of a Starbucks to be insanely consistent with what I get down the street from my house.

Which Brings Me To My Cinnamon Roll

Up the street from my house is a small neighborhood coffee shop. It’s quaint and very unique. It has a full service bakery attached to the street-side storefront. This means that not only can you get a nice cup of coffee, but they also have a few cases of freshly baked treats.

My wife and I only visit this shop on weekends and usually either Saturday or Sunday morning while on a morning stroll. About six months ago I noticed a freshly baked rack of cinnamon rolls.

I shouldn’t have for a variety of reasons, most of which was because once I had one, I was hooked. It might have been the best cinnamon roll I ever tasted. It is dangerous to have such amazing goo within walking distance of your house.

After my son was born, I took a couple weeks off work. Instead of just visiting the shop on the weekend, we ended up going mid-week. To my suprise there were no rolls. I inquired.

“We only make those on weekends.”

Ok. I know all about scarcity. I can live with that.

Over the next couple of weekends, I got my delicious treat on one of the weekend days.

(I don’t usually get crazy obsessed with food, but this is seriously the best cinnamon roll out there.)

But then it happened. One Saturday we got there around 11AM and I stared blankly at an empty tray with discarded frosting goo smeared around the wax paper. Surely they must just be waiting to bring out the next rack from the oven?

“Are you making more?”

The next weekend on Sunday it was the same story even though we got there a little earlier. Four more weekends go by with the same result.

Not only that, but one weekend morning I was determined. I woke up, did my morning chores, got the baby ready, and we were off a touch after 8am.

“Sorry but a family just pulled up and cleaned us out.”

I was at a breaking point. Like, why bother? Why create an experience that someone looks forward to and not deliver on that? Why create a world changing cinnamon roll if you refuse to let it be free?

I mean, even Apple eventually sells you an iPhone if you wait in line long enough. The last thing they want to do is drive scarcity so much that instead of building anticipation it actually does the opposite and forces a substitution purchase (I really want product A, but because I cannot get one, I buy product B).

As we approached Adagio’s today I vowed that this was my last attempt. I would find another place to patron if they refused to meet the needs they helped manifest. Either that or I would give up my obsession with this pile of sugar and dough (probably a good idea from a health/wellness perspective I know).

From outside the storefront, I could see a single roll sitting on the counter. I encouraged Emily to quickly get in line while I watched our dog and baby. Briefly I imagined one of those slow motion movie moments where I threw all of my belongings beside me and began thwarting passed people to jump on the counter protecting the roll like a war hero on a grenade.

There were four people in front of her. Miraculously, they all overlooked the gooey delight (I have no idea how…).

Today, it was mine.

As I glanced around at the few tables at the restaurant, I noticed a cinnamon roll in front of just about every customer. I realized that I was not alone. It wouldn’t surprise me if a good chunk of our neighborhood population has an obsession with this place for their cinnamon rolls.

I wonder how much disappointment they doll out each weekend… is it greater or less than the enjoyment?

I slowly unraveled the doughy edge. Mine… all mine. My precious.

A big trend in the web/app space right now is User Experience (or UX for short). UX is essentially just customer experience, but on the internet or in an app. The same thing that Ray Kroc obsessed about when designing his prescriptive framework for each McDonalds (not just setup, but how they ran each and every day). He knew that if customers were able to count on a specific experience and that experience was a good one, then it would be good for business.

My neighborhood coffee shop doesn’t give a damn about such things. They do care about their product obviously, but how they run the business also matters. I would almost argue that it matters more than the product. Especially if I can’t get their product more than 75% of the time…

Their goal is not to be McDonald’s. And rightly it shouldn’t be. I think they only have two locations in Denver. They probably aren’t trying to take over the world and serve a billion cinnamon rolls. That’s ok.

But why not make more on the weekends? Why not make cinnamon rolls constantly until noon and then after that it’s tough luck. I’m not asking them to remove scarcity.

What I’m asking for is consistency. Well, now that I think about it, the consistency I’m getting is that they are always out. So much so that some weekends I think:

“Why bother? I’ll just make coffee and eggs at home.”

By now you might think I have taken this post way, way too far. Is he really this cinna-crazy?

But my obsession is that of any dedicated entrepreneur. I can’t stop thinking about every dollar I spend in terms of how the business behind it is run, what they could do better, and how I would change things if it was mine. I have thought like this since I can remember.

So while this example is rather basic and might not be of large importance to the greater good in the world, it is telling in that most businesses pay little to no attention to what your experience is. They just sell stuff.

Look I made great world changing cinnamon rolls: lets open a bakery and sell them.

Take this opportunity to think about your business’s customer experience. Ask yourself these critical questions:

Now, let me get back to this cinnamon roll.

If you want to continue the conversation, hit me up on Twitter (@brentweaver) and let’s talk about customer experience or UX (or a better cinnamon roll in Denver).