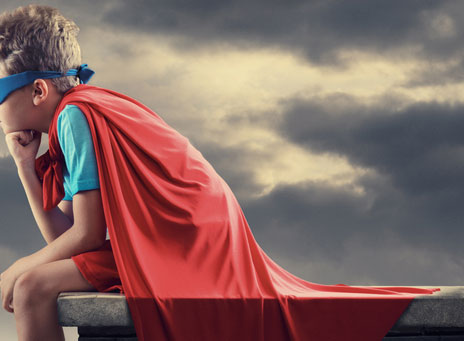 I don’t feel alone in this thought as I gaze at my ten week old. Other parents have admitted this simple adage to me even before I had my first child.

And then I think of my own parents: all knowing, all powerful.

This ideology clashes. I am aware that some of the choices that I make as a parent will be wrong. Yet at the same time I am stuck with the notion that my parents got it all right (because after all I am sitting here today the man I want to be).

It doesn’t take long for me to consider my first memory:

You chase this blurry rabbit far enough and you realize that your memories deceive easily. We each live a certain perspective. A vantage point with a lens. What I believed I lived may or may not have happened how I even lived it.

(Ok Freud. Put down the joint.)

It was time. I had been looking forward to this moment all day. I needed to decide… was it the tree or the fire truck?

I rummaged in my pocket for my power gems. If I was going to the fire truck, I needed a full jar. My fingers wrapped around the hexagon-shaped vessel. It was full.

I unscrewed the lid. Slowly tapping to release just one. I only needed one to make it.

The gem was gleaming in my hand. Pulsing with energy. The giant “S” that filled its round shape slightly smeared as my sweaty palms mushed the sugar from the coating. I put it to my lips.

“Was I prepared to transform?”

As my legs filled with unstoppable force, I could hear Edith (my English-accented babysitter) holler that I wasn’t to leave her sight. If she only knew the power I now had!

I burst into full speed. My arms stretched forward as my legs lifted from the ground.

It was only a matter of time before that helpless victim became crushed by the weight of the fire truck. But I had all the power gems I needed to save the day.

At the time of this experience, I was maybe four years old. I know that Edith took care of me, but I’m not sure I even fully understood the relationship between a family and someone that was hired to make sure I was safe.

Even this one simple act was a leap of faith for my parents. I know the first night that we had a night nanny to care for our son was a bit nerve racking. I imagine it was for my parents as well.

But Edith was wonderful. I even knew that when I was a kid.

She let me play and explore. I felt like I could go millions of miles from her. But now I bet she had her eye on me the whole time. What must have felt like a world apart was probably more like twenty five yards.

As a child your perspective is short and narrow. The counter to that is the innocence and creativity you create. While my understanding of the real world was limited, my grasp on my imagination was limitless.

I think Edith had an appreciation for imagination. Each time she would come to pick me up and care for me, she would bring me a tiny jar of Skittles. It maybe contained ten individual candies. There was something insanely gratifying about this treasure to a little boy.

Not only was it an amazing little treat (because she knew I despised chocolate), but that it was little. Edith was from an era far gone even for the 1980s. I don’t think it ever occurred to her that a super-sized-50-extra-for-free bag of candy was appropriate.

I don’t believe it was even about the candy. Or at least the sweets only played their part.

Each visit she would give me the little glass jar and then upon leaving, would request for it back. When I knew Edith was coming, the anticipation would drive me mad.

She knew how to play to the experience and also knew the container would captivate my tiny brain, exploding with joy each delivery.

These days one of the enjoyments of writing is being able to think creatively again. Not creatively like I do in my profession, but to just explore a memory by focusing on it to the point of constructing the world again so it can be described and told as a story.

I miss childhood. No matter the day, the world contained wild adventures.

“Where did we all I lose that wonder?”

I do not have an answer to this question.

The little I know about fatherhood so far tells me that I might get to relive a bit of it. I cannot wait. To get to experience innocent creativity once more.

An opportunity to believe again in the impossible, improbable, and unlikely.

The real curious part of this adventure is watching the pedestal I always saw my parents (and childhood) on unravel.

Mistakes have been made in my short tenure which tells me that mistakes were made with me. But I’m ok. I survived. I thrived.

So while this realization makes me feel as if I am finding out a big secret of my own childhood, maybe even allowing me to pull closer to my parents as fellow human peers, it also makes me revere them even more.

And so the circle of life goes. We get to live as children, then live through them, and ultimately see them live through us.