Not just a little bit. A lot a bit.

I am fully aware that sugar is the greatest evil to our bodies that ever existed.

I don’t care. Lucky Charms creator John Holahan deserves the Nobel Prize for Chemistry. And Peace. Come to think of it. He deserves all of them.

Did you know that the marshmallow shaped like an hourglass is meant to give you the power to control time?

I love Lucky Charms so much, the only way to keep myself from devouring them twenty-four hours a day, seven days a week, is to avoid keeping them at my house.

Just like I had to learn not to keep developers on my full-time staff.

Like eating Lucky Charms, I love to develop custom software.

When I was running my digital agency, it was our Achilles heel. A client would need a website and digital marketing (projects that were straightforward with plenty of processes and controls), but then they would mention some other problem in their business or organization.

A problem that could only be solved by writing reams and reams of code into a custom software application. The application would need servers. It would have bugs. The project would be rife with risks and time warps, but like a deranged wolverine hunting for star-shaped sugar bombs, I would relent and accept the job.

We could build a typical small business or nonprofit website within about 10% margin of error on our estimate. Some projects would finish taking a little less time than we thought, others a little more.

Then there was custom development.

We once quoted a project at two hundred hours that turned into a thousand plus hour monstrosity.

You might say to me that perhaps we had no business doing custom app development. Or perhaps our business model wasn’t set up in the right way. All good arguments.

Just like if I go out and have a two thousand calorie dinner at an excellent restaurant and am completely stuffed. Then come home to my in-laws’ house (they keep Lucky Charms at their house for my exclusive pleasure), and I still scarf down a bowl or two.

Thousands of business owners let me in behind the curtain to what’s going on in their business. If you think you are immune to this problem, trust me, every entrepreneur has their version of Lucky Charms.

When we first started UGURUS, we had a full-time designer and two full-time app developers on our team. I was so used to having Lucky Charms around, I mean developers, at my agency, I couldn’t imagine a new business without them. They were so talented, and I kept them busy around the clock.

When we first started our training, coaching, and education company for digital agencies, we also built our own:

And who knows what else. At one point we had almost a dozen Amazon Web Services (AWS) servers running countless tools and redundancies.

The subscriptions and service fees that we shelled out just for our development environment was equal to another full-time person’s salary.

We got so good at keeping this team busy. We set up an agile development environment with PBI boards, sprint meetings, and internal workshops on how to run scrum. Whenever this team would get even close to being idle, I would drop my priorities and work on the next sprint.

The problem was, building or selling software wasn’t our business model.

One day, on a plane ride home from a conference, something occurred to me. I was reviewing our profit and loss statement and looking at where we generated our revenue. Just like at my agency, ninety percent or more of our income was from stuff that had nothing to do with custom development.

We were spending fifty percent of our resources on custom application development. It was a steady and extreme dose of sugar killing our body. The majority of the benefit was short-term satisfaction. Instead of having to compromise with off the shelf software, and trust others, we got to build our custom fitting solutions.

I was talking to a friend about something entirely unrelated, and she said:

“If I want to avoid cookies, I don’t keep them in the house.”

If Lucky Charms were in my cupboard, they would get eaten. Maybe it happens in twenty-four hours. Maybe in two days. Regardless, they are gone within a short period. All disciplined self-control would do is delay the consumption to perhaps a couple of weeks.

Following my friend’s advice, I stopped buying them.

It was like magic. I stopped eating Lucky Charms (except at my in-laws).

It turns out, the Power of Habit says our lives are driven much more by habit and routine than by choice and free will. We make very few decisions throughout the day. Our brains conserve power by allowing routines run without much interference.

The Habit Loop says that we get a cue, some trigger, and follow that with a routine that leads to a reward. 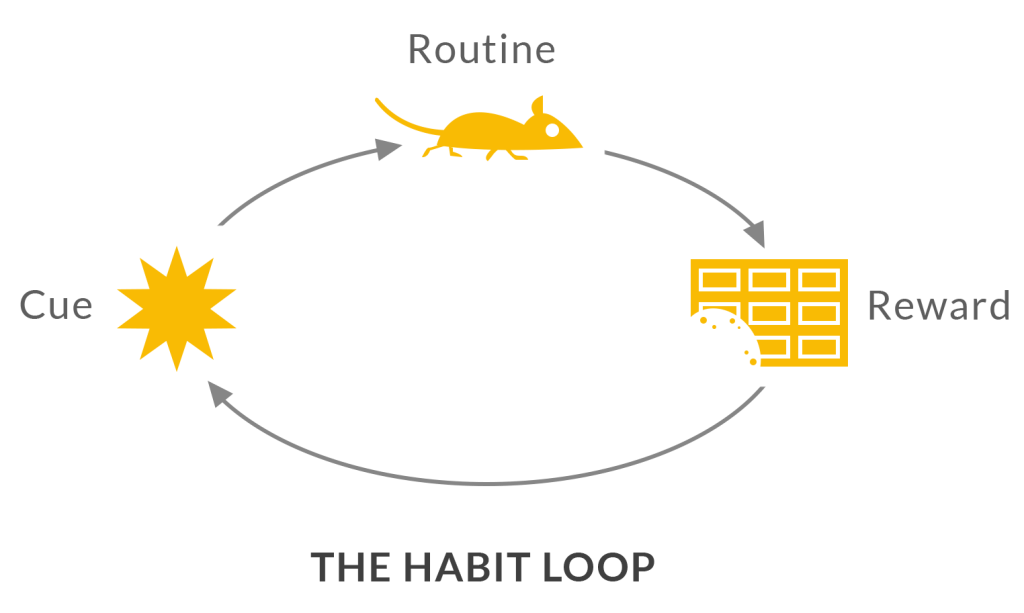 (Image from The Power of Habit.)

My cue was opening the cupboard and seeing Sir Charms. From there it was “They’re Magically Delicious!” all the way to the bottom of the box. Instead of buying LC’s, I bought nuts, cheese, and apples. The next time I went to the cupboard, while my choices weren’t nearly as delicious, the habit loop played out differently.

I’m sure I have my share of unhealthy snacks from time to time. I’m not impervious to this. However, there is no other food that I compulsively devour like Lucky Charms. So for me, a huge step forward in eating healthy, as my friend advised, is not keeping them in the house.

I realized how useful modifying cues could be in reprogramming habits. Not only could this influence my snack and cereal consumption, but any area of my life that I wasn’t getting what I wanted.

When I thought of how I spent my free time a few years ago, I noticed I watched a good amount of TV (one to two hours per day, with the occasional binge of much more). I’d get into a good show (Breaking Bad, True Blood, Entourage, etc.) and dozens of hours would evaporate. Just getting current on Game of Thrones absorbs sixty-seven hours of your life.

I couldn’t help it. I walked into my living room, and I’d think, eh, why not – I’ll turn it on and see what’s available. Timewarp.

So five years ago I got rid of the TV. Not just “cutting the cable,” but removing all of the devices from my house. We still watch the occasional show from a laptop or phone, but the viewing experience is subpar, and the cue isn’t in the living room anymore. I went from one to two hours per day to about thirty minutes to an hour per week. I now have a stack of books in just about every room I hang out in to give me the cue of reading.

A year ago I wasn’t getting the exercise I wanted, so I bought a bike. I would occasionally commute to work, and I loved it. But too often I would walk out to my garage and choose to drive instead. So I got rid of the cue and sold my car. A year later I’ve biked over 2,500 miles and am in the best shape of my life.

We still have a family car. I drive when necessary, but the obstacle I’ve created for myself nudges me to my bike for most daily travel. Including a nine-mile round trip taking my son to preschool in a bike trailer.

Earlier this year I bought a Nintendo Switch and found myself playing it every chance I got. Every time I saw it I wanted to play Breath of the Wild (fantastic game!). But just like TV and my car, it wasn’t what I wanted. When I sat down and journaled about what was important in my life, I came back to three words: riding, reading, and writing.

I was doing pretty good on the first two, but I wasn’t writing. So I got rid of the Switch. Instead of having it accessible around the house, I carry around a Moleskin to make writing more accessible.

This trick to remove sources of harmful habits is one of the most powerful lessons I’ve learned in my life. My wife recently chastised me for being on my phone at the dinner table before eating. I’d sit down while she was finishing up prepping dinner and I’d be fried from a day of working and curing the boredom, I would flip open some news or social media: Lucky Charms for my brain instead of a nutritious snack.

I bought some Table Topics, The Daily Stoic, and do my best to remember to put my book de jour on the table. Instead of going for my phone, I choose what’s right in front of me. My next step is to get the Light Phone 2 when it comes out and dock my smartphone as much as possible.

At UGURUS, we had to stop buying Lucky Charms at the store. We realized that our core business was not custom software, so spending fifty percent of our resources on custom software was not sustainable. We had developers in our house, and it was too easy to eat them every chance we got.

Don’t like the way WordPress does XYZ, spend two months making your own.

Don’t like the quality of Google Hangouts, spend a month making your own.

Don’t like the Infusionsoft UI, spend three months making your own.

We made some hard decisions and reorganized our team around our core product offering. Instead of spending so much time on our platform, we found off the shelf software to fulfill the technology needs in our business. Removing our design and development staff was a painful transition and wasn’t free of its costs and hurdles. We still hire developers – outside contractors and consultants – but we evaluate those costs and investments as they should since it’s not core to our business model.

However, our accountability chart is a much stronger reflection of our business model. This alignment is what is important. Freeing up these resources helped us scale up our business and pushed us to spend a lot more time with our customers, mentor team, and think about how we were meeting the needs of our market.

The other day I was coaching a digital agency that found themselves in the exact same problem. They had two custom app developers and felt obligated to keep them busy with new complex projects. Their core business model was websites and marketing, but they couldn’t resist throwing complexity grenades into their lives with large-scale app projects.

This agency’s accountability chart was a mess. They lacked a clear and coherent business model, and the people they had in their business weren’t rowing in the same direction. They were spending fifty percent or more of their time internally dealing with issues and problems from only twenty percent of their revenue.

I started telling them about my problem with Lucky Charms. They probably think I’m a little crazy for comparing their complicated people issues with a box of cereal.

And they are right – as long as their developers are in the house, the issue is complicated. If the developers are there, they have to pay their salaries which means they need to keep them busy with billable work. However, every time they take on that billable work, it causes headaches for other people, and that reduces their ability to produce the real billable work that their agency is all about.

The solution, of course, is much more straightforward. Just don’t keep the Lucky Charms in the house in the first place.

What is your Lucky Charms? Are you keeping them in the house? How is it serving you?