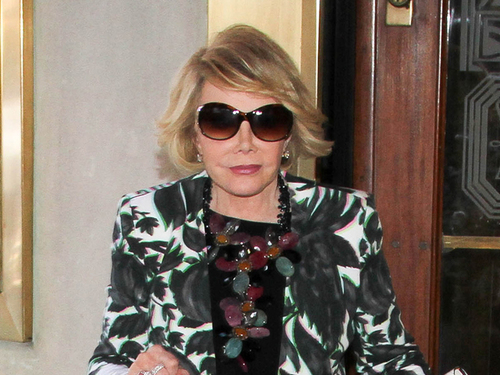 It’s not like I was a big fan or something, but I always enjoyed moments when I saw her ruffling people’s feathers. Taking this opportunity to reflect, what can we learn from Joan Rivers in her death?

One thing is for certain, she went against the status quo. She stood up to critics, foes, and friends when she believed.

Not being afraid in this world can get you really, really far. Fear drives us into a burrow. It keeps us from saying the things that everyone is thinking. Denies our ability to connect with others in a meaningful way.

I never met Joan, but from where I’m sitting she embraced the fear. Surfed it like a wave.

She Used Humor to Tell the Truth

Unfortunately these days, we ignore hard truths. When people present facts on dangerous and scary issues, we put our heads in the sand. But somehow, humor gets through.

The likes of Jon Stewart know this and so did Joan. Humor lets our guard down. It keeps us human.

Instead of readying our rebuke, we find ourselves caught in an avalanche of endorphins, serotonin, and dopamine. Sometimes just long enough to actually listen to whatever unfortunate truth the giver is exposing.

She Played for the Love of the Game

I’ve become fascinated with people that are 80 and still playing the game like they were 20. Sure, Joan tried to “look the part” as a young gun, but under that surgical veil was an aged fighter.

Seriously, promoting her 12th book at 81?

I recently saw that Ron Paul created his own web channel. Most eighty year olds that I’ve personally known are comfortable in a chair reading and soaking in the last years.

But these hustlers love the game.

They’ve already made it. There is no more heights they can reach. For them it was never about the end, it was truly about playing and loving the game for everything that it is.

As a young gun that loves the game for what it is, I hope that I can keep my mojo into my cotton top years.

One thing is for certain, the world is less full without her. I tip my hat to you Joan.